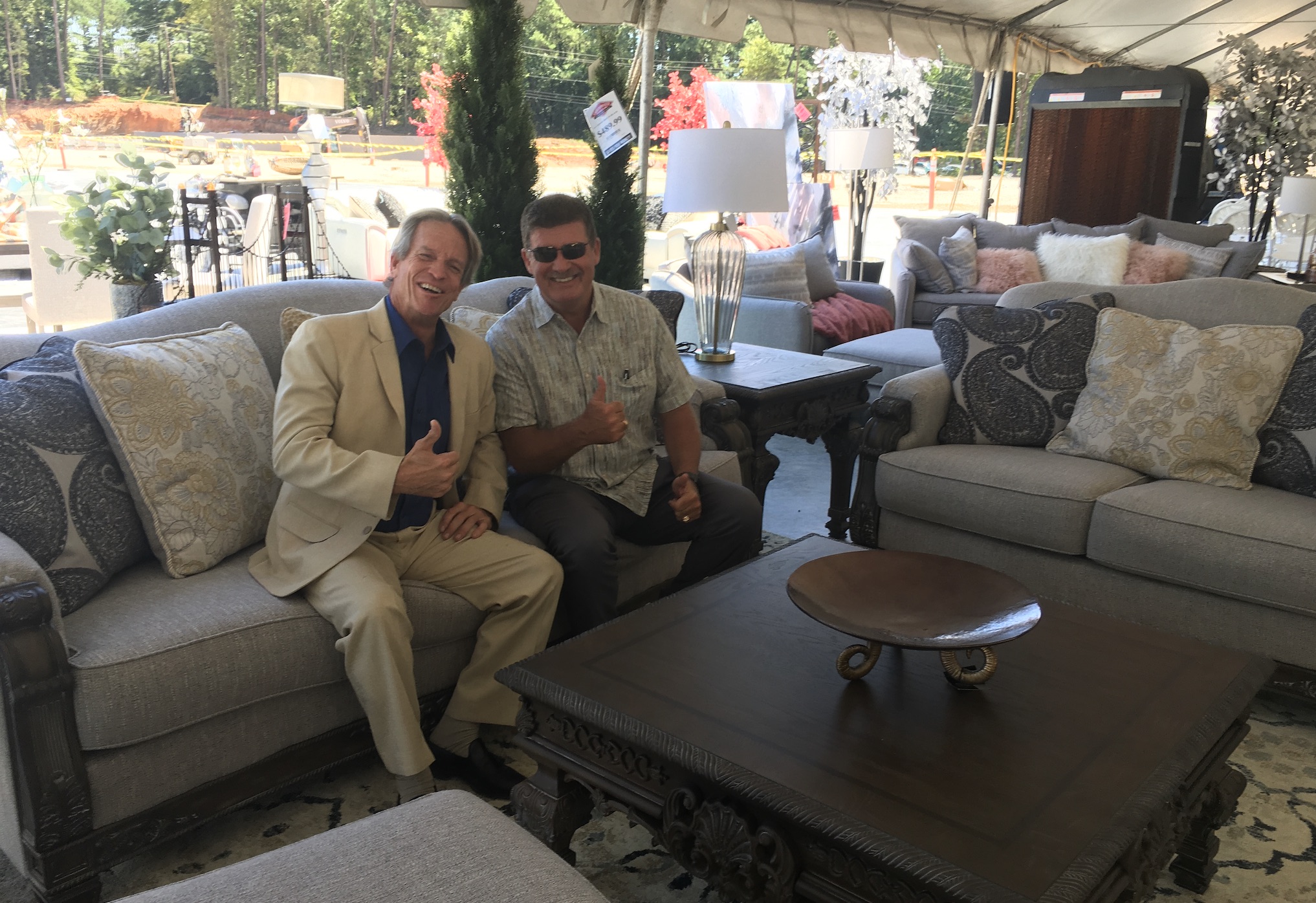 They never gave up. And after 30 years or so of efforts, the two partners and their families celebrated on Thursday the construction start of a warehouse in Tucker that is to be the foundation of the next generation of their furniture store – reflagged from Underpriced Furniture to Georgia Furniture Mart. 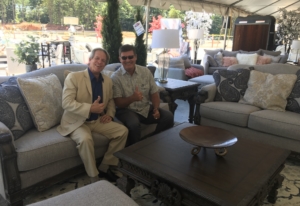 Partners for some 30 years, Mike Hall (left) and Tim Padden celebrated Thursday the construction of a warehouse for their furniture business that’s to ensure customers receive their furniture no more than a day after the purchase. Credit: Amanda Brown Olmstead

The celebration on a sunny afternoon reminded of the human scale of some of the businesses locating or expanding in metro Atlanta.

There were opening remarks about a warehouse that’s to supply 300 jobs. Speakers represented the Georgia Department of Economic Development, DeKalb County, City of Tucker, and Tucker Summit Community Improvement District.

These comments, brief by some standards, were followed by a meal of barbeque chicken and beef, potato salad and coleslaw, white bread, and tea – both sweet and unsweetened. Plus, an assortment of cookies for desert. Folks sat on furniture from the showroom.

The event also reminded of the tenacity required to stick with a business through changing consumer demands and economies. Partners Mike Hall and Tim Padden have weathered economic ups and downs ever since Ronald Reagan’s second term in the White House.

In this case, the journey started in 1986 with a waterbed business that opened just in time to ride the crash of that trend. The owners kept seeking a niche in the retail furniture sector until arriving at a current business model that generates a reported $40 million out of a showroom in Norcross and warrants a new-build warehouse.

Hall kept business basics at the front and center of his remarks at Thursday’s celebrtion. Hall focused on two groups – customers, and the warehouse workers and delivery teams who are to deliver furniture no later than one day after a customer bought it.

The challenges of the delivery schedule are considerable, given metro Atlanta’s traffic congestion, Hall observed. But same- or next-day delivery has become the bare minimum in today’s competitive retail climate. Call it the Amazon effect – consumers want their purchases delivered almost instantaneously. These expectations extend even to mom and pop businesses like the reflagged Underpriced Furniture. 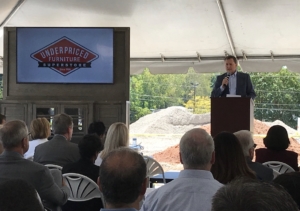 Tucker Mayor Frank Auman welcomed the construction of a warehouse to serve the needs of Underpriced Furniture, soon to be reflagged as Georgia Furniture Mart, to the city. Credit:David Pendered

“We are all living in a world that is unbelievable; just constant, never-ending change; there are so many unknowns,” Hall said. “Retail is changing so much. It’s so difficult. We have to be more and more relevant today to stay in business in retail. So we continue to find ways to differentiate ourselves, to bring more value, to bring a better experience.”

Hall and Padden are banking on the location of the new warehouse. They had operated out of a warehouse in Norcross, near the intersection of Buford Highway and Beaver Ruin Road. The site presented transportation challenges that weren’t going to be much improved by alternatives in the Suwanee/Braselton warehouse district.

The Tucker location, near the intersection of U.S. 78 and Mountain Industrial Boulevard, means delivery trucks that depart at 6 a.m. will be avoid enough traffic to make multiple deliveries during the day, Hall said.

In terms of warehouse workers, drivers and other support staff, the Tucker location means they can commute to and from work on MARTA. The area is served by MARTA bus routes and Hall said new bus stop is to be installed that will ease the walk to the new warehouse and one operated by Macy’s.

“We need transit to get our labor force here,” Hall said. “Out in Suwanee or Braselton, there’s no transit.”